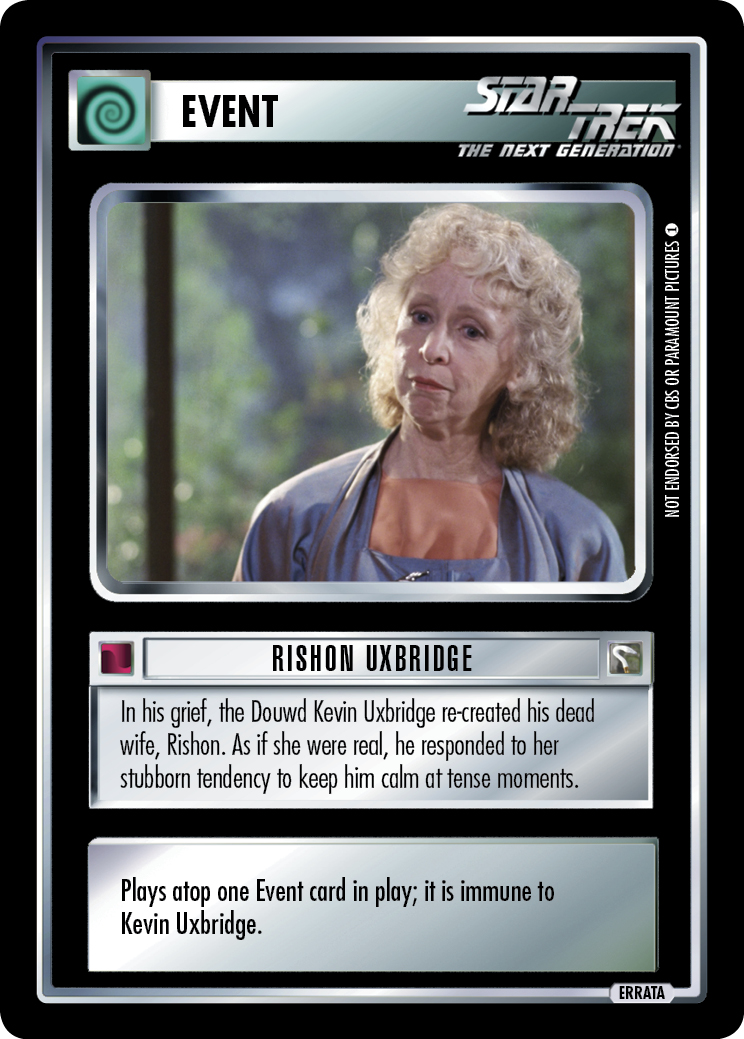 In his grief, the Douwd Kevin Uxbridge re-created his dead wife, Rishon. As if she were real, he responded to her stubborn tendency to keep him calm at tense moments.

Plays atop one Event card in play; it is immune to Kevin Uxbridge.

Rule hint for this card

This card has an erratum:

Rishon Uxbridge was fine for a long time. Like many early cards, the phrasing it used was more colloquial, of a sort that nowadays is often found amusing (when not confusing). Then came the Shades of Gray expansion, and a card called Rishon. The interaction between Rishon, Kevin Uxbridge, and Rishon Uxbridge was discovered late in Shades of Gray development, but the design team thought it was cute enough to leave it in place. In the exceedingly unlikely event that all three cards are in play at once, Kevin the interrupt could discard the personnel card of his re-created wife. We're now taking this opportunity to eliminate that silly interaction, modernizing the wording of Rishon Uxbridge to match how its original gameplay would be written today.

Game text before errata: "Plays atop one Event card in play. Protects the underlying event from Kevin Uxbridge. However, Kevin Uxbridge may remove (discard) Rishon. (Not cumulative.)"

Card logging info: Logged by openCards team at May 1st, 2009.

(Copyright 1995 by Decipher)
Image Source: The Next Generation - The Survivors (Season 3 - Episode 3)
UCT-ID : ST1E 2 C 46 (manufactor info on card: none)
Print-Style : color (standard) / black border / non-foil
No "reprints" for this card (no cards published with same title and game text in another expansion or with another collection info).

- "Alternate Universe Rulesheet: Rishon Uxbridge" by Decipher-Games at May 18th, 2010
Log in OR create a new account to write a card review.

Decks with this card (or with a reprint of this card):
- "Mot`s prominente Azubis" by baschti
Create your own Deck in the ST1E deck section!

There are 41 entries for Rishon Uxbridge (ST1E 2 C 46) at the Tradeplace (270 haves and 0 wants). Click here to see all trade list entries for this Common card!
Also see here for all trade lists with any card fom "Alternate Universe".