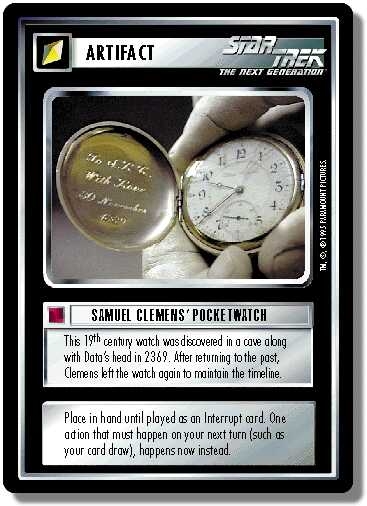 This 19th century watch was discovered in a cave along with Data's head in 2369. After returning to the past, Clemens left the watch again to maintain the timeline.

Place in hand until played as an Interrupt card. One action that must happen on your next turn (such as your card draw), happen now instead.

Rule hint for this card

This card has an clarification:

This artifact allows you to perform now one action which must happen on your next turn (any action that is scheduled to happen, or which you are required to perform by a card or rule). It does not allow you to perform an optional action, such as playing a card. Examples:

Card logging info: Logged by openCards team at May 1st, 2009.

(Copyright 1995 by Decipher)
Image Source: The Next Generation - Time's Arrow, Part II (Season 6 - Episode 1)
UCT-ID : ST1E 2 R 7 (manufactor info on card: none)
Print-Style : color (standard) / black border / non-foil
No "reprints" for this card (no cards published with same title and game text in another expansion or with another collection info).

There are no decks with this card this time.Create your own Deck in the ST1E deck section!

There are 76 entries for Samuel Clemens' Pocketwatch (ST1E 2 R 7) at the Tradeplace (153 haves and 5 wants). Click here to see all trade list entries for this Rare card!
Also see here for all trade lists with any card fom "Alternate Universe".